Shakespeare and The Globe 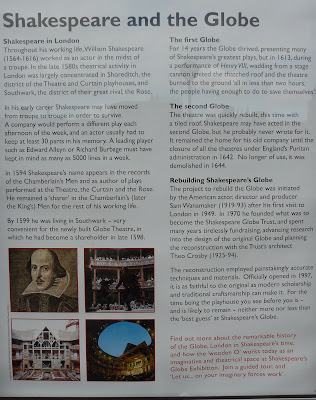 In 1599, the first Globe Theatre was completed on the south bank of the Thames River. William Shakespeare, along with three other actors, bought a share in the Globe. It stood for 14 years and presented many of Shakespeare’s greatest plays. During a performance of Henry VIII in 1614, a stage cannon ignited the thatched roof and the theatre burned to the ground. However, it was quickly rebuilt and continued to present plays until the Puritans shut down all theaters in London in 1642. It was demolished in 1644. 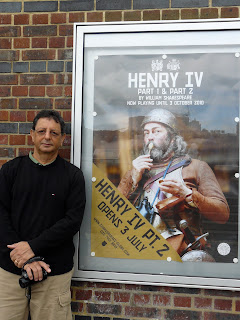 The American actor Sam Wanamaker initiated the rebuilding of Shakespeare’s Globe after his first visit to London in 1949. Workers began construction in 1993 on the new theatre near the original site. The latest Globe Theatre was completed in 1996; Queen Elizabeth II officially opened the theatre on June 12, 1997 with a production of Henry V. 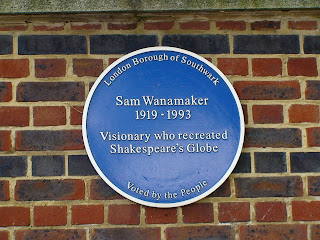 In 1596, a Dutch student by the name of Johannes de Witt attended a play in London at the Swan Theatre. While there, de Witt made a drawing of the theatre's interior. A friend, Arend van Buchell, copied this drawing. The sketch is the only surviving contemporary rendering of the interior of an Elizabethan-era public theatre. As such, it's the closest thing historians have to an original picture of what the Globe may have looked like, seating 1,500 people between the galleries and the "groundlings." 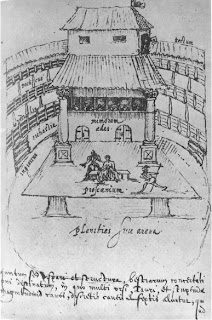 In addition, there are suggestive descriptions included in the plays themselves, such as the famous Chorus, which begins Henry V: ‘And shall this cockpit hold the vasty fields of France / Or may we cram within this wooden ‘O’...’ 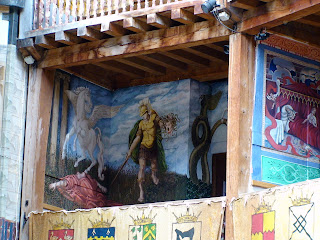 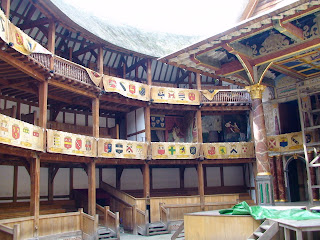 View the video tour of the Globe Theatre and Exhibition:

Email ThisBlogThis!Share to TwitterShare to FacebookShare to Pinterest
Labels: Shakespeare and the Globe written and produced by Michael Minassian

William Blake
(1757–1827)
William Blake was born in London, in 1757. Although he had little formal education, he made his living with his engravings and watercolors.

In 1789, he published his book of engravings and poems entitled Songs of Innocence

and a few years later, in 1794, he followed with Songs of Experience which included “The Tyger.” Blake was part of London’s intellectual circle though he was often labeled as eccentric and delusional. Among the recurring themes of his work were: good and evil, heaven and hell, knowledge and innocence. Blake was ahead of his time and spoke out in favor of sexual and racial equality, rejecting the teachings of conventional religion. Blake's work was not generally recognized by his contemporaries but today he is considered an important and unique talent of the English Romantic Period. He influenced many writers and artists as diverse as Aldous Huxley, Jim Morrison of The Doors, and the film director Jim Jarmusch.

Here are some links to more information about William Blake and his work:

For an introduction to Blake's poem "The Tyger" watch the You Tube video:

Fathers and Sons in Hamlet

Shakespeare's Hamlet is a revenge play, but throughout the play we get a clear picture of the character of Hamlet as a man who sees his duty before him but who shirks it at every opportunity. Part of his dilemma is that he knows that the murder of his father was wrong, but he also realizes that vengeance is wrong.

Posted by mikial at 8:17 AM No comments:

The Mayan City of Chichen Itza

Chichen Itza is a Mayan City on the Yucatan Peninsula in Mexico. It was established hundreds of years before the arrival of Christopher Columbus and most likely served as the religious center of the Yucatan.

Today it is the second most visited site of Mexico and is one of the New Seven Wonders of the World. The ruins include the Kukulkan pyramid which is also known as “El Castillo” (the castle). 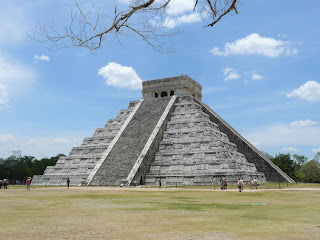 The Maya originated around 3,000 years ago in present-day Central America and Mexico. The Mayan empire flourished in the southern regions from around 250 AD to 900 AD. The empire in the south collapsed around 900 AD, but the northern Maya thrived until the Spanish conquests of the 16th century AD. 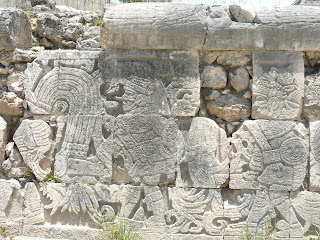 The Maya were skilled farmers and created a sophisticated written language. They also carried on trade throughout a network of cities that went as far south as Panama and as far north as Central Mexico. They developed a number system which included the concept of zero and used their mathematical knowledge along with celestial observations to develop a sophisticated calendar and to create monuments to observe and commemorate movements of the moon, the sun, and Venus. Several of these monuments can still be seen at Chichen Itza today. 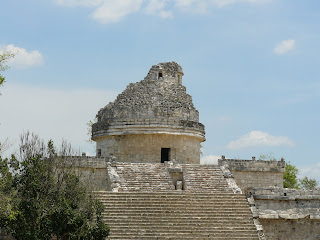 In the summer of 2008, we visited Chichen Itza. You can view a short video tour we created for Eye On Literature. 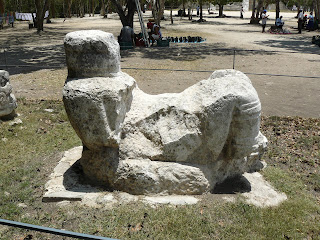 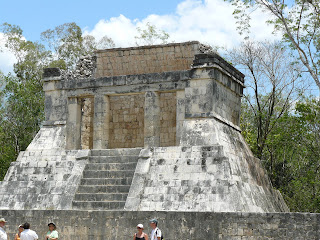 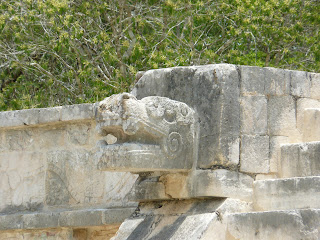 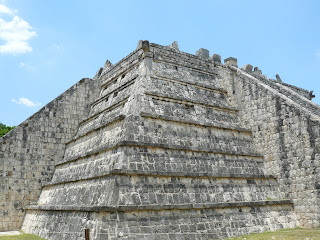 Poetry and the Writing Process with Michael Minassian

In this podcast recorded in the Summer of 2008, Professor Gary Kay and I talk about the writing process and poetry. During our discussion, I read three of my published poems and we talked about the evolution and background of each poem. The poem "Crazy Jane..." was workshopped at a 1999 Poetry Conference in Sante Fe, New Mexico. The leader of that workshop was a poet and editor named Robert McDowell. You can visit Robert's website and sign up for his Free Poetry Mentor Newsletter at:

During this podcast I also mentioned the writer Julia Cameron, author of The Artist's Way and several other excellent books on creativity and writing. You can find out more at:


Here is a video of our discussion


You can also hear us discuss a fourth poem entitled "The Arboriculturist" at my blog:

In Search of Literary San Antonio

In July of 2008, my wife and I visited friends San Antonio, Texas. While we were there, my friend, Tom Davis a professor at San Antonio College, helped me track down three literary sites in San Antonio. The first two locations we visited were the residences of Robert Frost and his family members during the winter of 1936-37. Frost and his wife decided to take a break from their winters in Key West, Florida when his daughter moved to Mexico. However, due to an unusually harsh winter, Frost decided not to return to San Antonio after that year.

Robert Frost was born in San Francisco in 1874 and moved to Lawrence, Massachusetts. He was enrolled at Dartmouth College in 1892, and later spent some time at Harvard His first professional poem, "My Butterfly," was published on November 8, 1894, in the New York newspaper The Independent. In 1895, Frost married Elinor Miriam White and together moved to England in 1912. While in England, Frost published two full-length collections of poems and returned to the United States in 1915. By the nineteen-twenties, he was the most celebrated poet in America -- his work is principally associated with the life and landscape of New England. Frost was awarded four Pulitzer Prizes for his books of poetry. He died in Boston on January 29, 1963.

The third literary landmark in San Antonio we visited was the O. Henry House. O. Henry was the pen name of William Sydney Porter whose short stories are famous for their ironic endings. He was born in 1862 on a plantation in Greensboro, North Carolina. In 1882, he moved to Texas, where he held various jobs, including that of a ranch hand. Two years later, he moved to Austin, and in 1887, he married a local girl, Athol Estes, who was only seventeen years old. In 1895, Porter was accused of embezzlement for the time he worked as a teller at the First National Bank of Austin. Although he denied the charges, he was arrested and skipped bail before the trial began. O. Henry spent part of 1895-1896 in San Antonio, Texas working on his magazine The Rolling Stone. The house itself was relocated from the old Lone Star Brewing Company site to the corner of Laredo and Dolorosa and is managed by the San Antonio Conservation Society. In May of 1999 the restored O. Henry House was reopened to the public.

For more on O. Henry and his time in Austin, Texas, visit my posting at: On March 7, 2008, I visited the Ernest Hemingway Home in Key West, Florida. Hemingway purchased the house on Whitehead Street in Key West and owned the property for thirty years from 1931 until his death in 1961. He actually lived in the house for ten years and wrote many of his novels in his studio which was located in the carriage house. A cat walk once connected the two structures but was blown down during one of the many hurricanes that passed through Key West. The surrounding gardens are also home to the first swimming pool ever built in Key West. The interior of the main house still holds many antiques and art work that Hemingway collected on his trips to Europe and Africa. The main house was built in 1851 by Asa Tift, a marine salvage specialist. Guided tours of the house and grounds are available daily. Here is an interview with Linda, manager of the bookstore at the Hemingway Home: